Hello friends. I sat down yesterday and I sewed this outfit and it is actually two pieces of clothes you see as your clothes :) See if you'll like it ....

Yes this is my new cigarette :) Belt in his 5 or 6 years is still like a stone and I like it very much :) I designed a clothes with a throbbing neck and a crowded shit this time ... When I took a photo, Figure 1 haha :)

When you see it from behind, you realize that there is not a one-piece dress, because it's two pieces of clothing. I wanted to use two pieces of one piece of my artwork to make the badies and skirts in separate places. I even thought badi was my savior in the winter :)

As you see the throat, I made it quite long and I use it as two floors, so I thought you'd be more shaken :) Sagging is not happening :)

Yeah I tried to combine them separately so you wonder how they stand alone :)

As for how you did it .......
First we spread our penis in two layers and we pay attention to the tops of the lines because we want to keep it nice.
As I said, I use my own clothes as a pattern. I used a white badmint so you can see more clearly on black. I set the lines of collective needles around the badine except for the arms (arms - outer lines), then I took a badiyi ninja and looked at it like this.
"-Do you want any difference in this outfit?
I could make a little bit longer for him, and I also stretched it a little longer, the length of the needles. "I wanted to make another change on this badge, for example, short sleeves, zero sleeves and so on, I wanted to get in and out, so I would have to make it look narrower in any movement, so that it would be narrower, so it would also keep the arms around and maybe the shoulder width a little short because the wide shoulder might not be very nice in short sleeves :) Anyway, cut it around by leaving a-2 cm in a nice stitch share after you have pinpointed the pins... 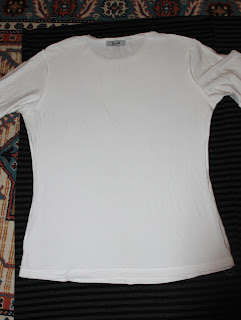 After the cut, I always want to double the fold, just in case I want to remove the disproportion between right and left. If there is a disproportion in the look, I make small tweaks with scissors. In general, this leads to small proportions. If you are using your clothes but not the mold, do not skip this stage. 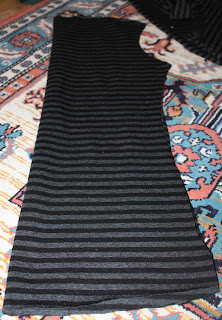 As for the arms. I took the arm mold in the stitch molds section and folded the mold on the fabric I made twice and put it in it, as you can see in the picture below. This molded arm was in normal straight arms, but I thought for this body to be a thicker, wrinkled, steep arm. For that reason, as I have seen in places where I have pointed collectively, I took up the distance between the armpit and the shoulder. If you take this distance up, you can give as much shirting or swell folds as you put your arms :) .. Anyway .. After attaching this mold with the pins from the outside lines, I thought that I should lift the pattern again and ask for another change yes again I wanted a long arm because I like to pull it in the winter so that it closes my arms. I have made my arms a little longer for him, and also adding the stitches to the account. This will of course be cut once again from the same collar :)

I usually have to keep the inside and outside the same because I folded the throat in half and the inside and the outside of the penile seem partially different. For this reason, it is actually a rectangle cut. I measured the neck width of my white badminton and cut a throat wide. In the following illustration, the neck width is from right to left. It's actually a folded fabric I try to show you where I curl. So I kept the height long because I was going to make a throat that would be out of the way. And while I was using the throat, I was going to fold it in my neck, so I cut a very long cloth for it. Height can be as long as you like to use, but the width must be constant, up to the width of the badin's neck. Cut the suture share by adding the account. 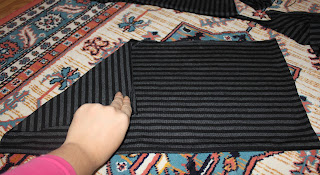 After all of these parts are cut off;
. badinin shoulders, right and left edges joined together
.the edges of the tracks are sewn
.They are fastened to the shoulders with needles and as you said, you can place the arms in the shape of a cheek or a cheek when placed. At this stage, the upper extremity of the limbs is pinned to the upper shoulder, and I shape the shoulders by preventing the asymmetry in the front and back vertebrae. You can always place the pilots with one side facing up, while the other side facing down. I do not know how I can explain what you mean after you have tried it several times :)
.The cut part for the tread is opened and folded in the middle, and it is made ready to be folded back and fixed longitudinally so that the stitches are stitched inside.
.two fasteners are fixed. At this stage, I first determine the front of the badin, the front, the back. because the right and left shoulder seams are already stitched together. I also notice that the part of the neck that we are going to neck is folded in the way that the stitch will come to the back and it will be joined with the right and left shoulders where it will be the front, middle and the shoulder. So, in the merging phase, all of them are sitting in their place. First you need to combine the Needleheads and the backsides to make it easier to believe :) All of these are practical things learned from the dike dike :). After fixing with a needle, replace the neck
.then we sew the edge of the arms and the gold of the bad. I'm doing zigzag because I have a coat so my panties are both more beautiful and there is no shrinkage. And the possibility of flow is getting out of the way.
And here it goes badi. Tell me what's bad, tell me if it's over, if there's something I missed, please do not hesitate to ask ...
It's very simple when it comes to the skirt. I put the green hem as a mold, but because I do not want a high waist, I cut it short and the front one-piece back is slightly wider because there will be a stitch from the back hem and a zipper.
Then we combine all the pieces and leave the zipper open. We pierce the zipper instead, fold the waist and sew all of them. We are twisting the bottom of your ears and sewing it with zigzags.
I also put a liner into it later. As I felt that it was a crotch, I was going to look inside, so I lined it up with a jersey black cloth. In those simpler sizes, we cut the fabric and stitch it right and left and back and leave the zipper open. Then we turn the skirt over and into it. The skirts and lining seams will kiss each other so it will be nicer to see the stitches from the inside. Then I fix the waist around the zip around the zip and I fix it with the pin and the zigzags. I also sewed the back seam part of the back seam part to the back seam part so that the lining slip up to the top :) Finally I folded the bottom of the lining so that it would be a few cm above the ete :) You can see the lining suture in the photo ... 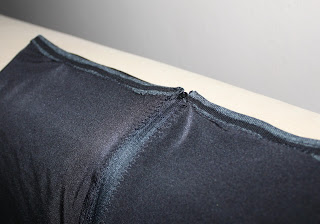